Evening all!! I'm back with quite a few projects to share with you today...although they're all for the same purpose. Confused?? I'll explain....

28 years ago on the 11th August, my Mum and Dad got married!! Since then they've been a heck of a lot of up's and downs...but one thing has stayed the same ...they're still married!! As we were going through all of the old photographs whilst moving Nan to her new home, we obviously stumbled across their wedding photos...but no I can't share any of them with you as to be perfectly honest, I'd rather like to stay alive!! What I will share with you today though is all the cards we made for them....starting with the card I made from my Brother... 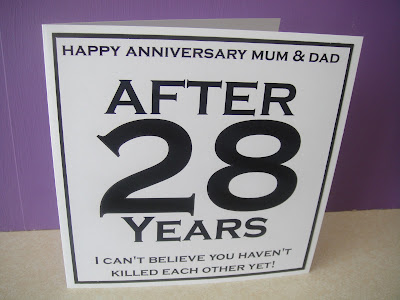 I'll admit there's not much prettiness to it, but to be honest if this card had been for sale in a store, it would definitely have been the card my Brother had chose!! He's not exactly touch feely my Brother, and he's also got a bit of a warped sense of humor, so when I saw the sentiment used on something else, I couldn't resist making this!! 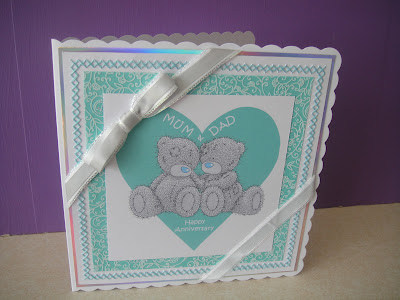 This card is the one I made for my parents...Having made quite a few anniversary cards lately as well as knowing Mum can see all the images I have to use, I just didn't know what to do. With a little bit of a play about, I decided I'd try something new...so this is the first card I made using stitched edges on the layers. I wasn't sure quite how it would work out, but once it was finished I was ever so proud of it!!! 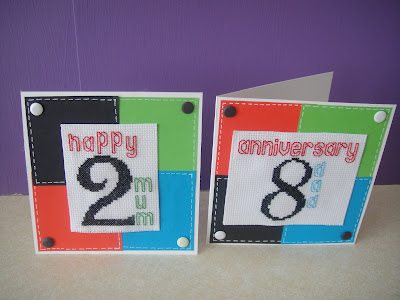 These were made by Crusty...when it comes to making cards, Crusty's not quite as confident in her abilities as the rest of us...she usually chooses an image to stitch, then passes it to us to add to card!!! Not these though...after struggling to decide what to do, she came up with the idea to make them a card each...one that said "Mum 2 Happy" and one that said "Dad 8 Anniversary", that way when added together they'd make a "happy anniversary Mum & Dad 28...how good an idea was that!! Once she'd finished stitching the wording, she brought them to me to place on a card ...but Ooo no!! I was having none of it haha!! I gave her the idea of the stitched patched and she did the rest...she stuck it all together, faux stitched the edges and placed the dots for added definition...so these two were all made by Crusty. 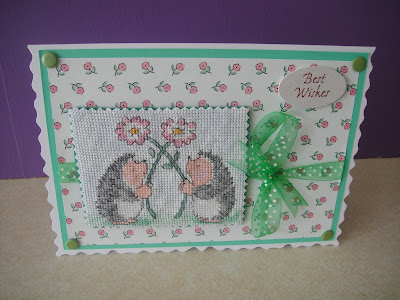 This card was made by Lady...she also struggled to decide what image to cross stitch...but finally settled on the hedgehogs. She was happily stitching away...then all of a sudden whilst texting one another one evening, Lady suddenly said "Mum does like hedgehogs doesn't she??" hahaha... as I told Lady before, and Mum said herself, it wouldn't matter if she'd stitched a big ugly spider...it's the fact that Lady took the time to make it herself that matters most...plus Mum thought they were really cute!! Lady was also clever enough add Mum's favourite colour of green to the image, meaning there was no way she could not like it haha!! One of the first things Mum said after she'd opened the card, was "where's the Ribbon from" ...not that any of us are obsessed with ribbon of course!! 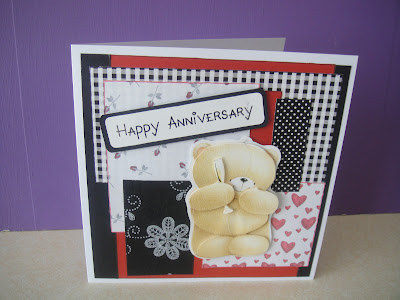 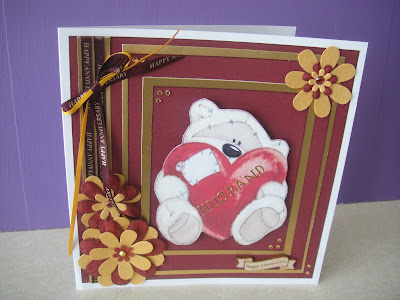 Anyone spot there's two cards there??? Well yep there is...and that's because Mum made two cards for Dad!! She'd made the burgundy and gold card way back in February, but then decided she wasn't quite as keen on it as she had been. So Mum being Mum, decided to make another one which was the red,black and white card...she really loved that card. But when it came to their anniversary she gave him both cards anyway!!! Dad of course loved both cards. 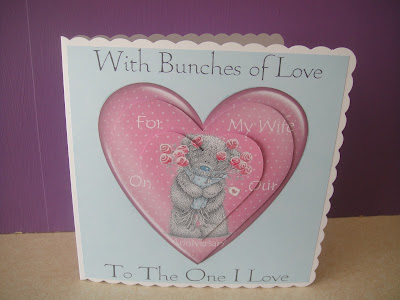 Finally, this card wasn't made by me, Mum, Crusty or even Lady....nope this one was made by Dad!! Since the day we all started making our own cards, Dad was also told he needed to make his ones too...well why not...we have plenty of stuff and it means more than just buying one of the shelf that hundreds of other people also have!! I'll admit he's not the greatest card maker!! In fact most of the other cards he's made have been mostly made by me, with Dad's help!! Not this one though ...nope this time I gave him the software and told him to get on with whilst I sat in the garden sunbathing!! I did have to help him print the bits and bobs out, but after that he put it all together himself to make this...see even Dad's joined the business now haha!!

Usually I'd wish the recipient of the cards a good day at this point, but as I was with them, I know that Mum and Dad had a lovely meal out and enjoyed their day!!

Posted by little-Andrea at 6:32 PM